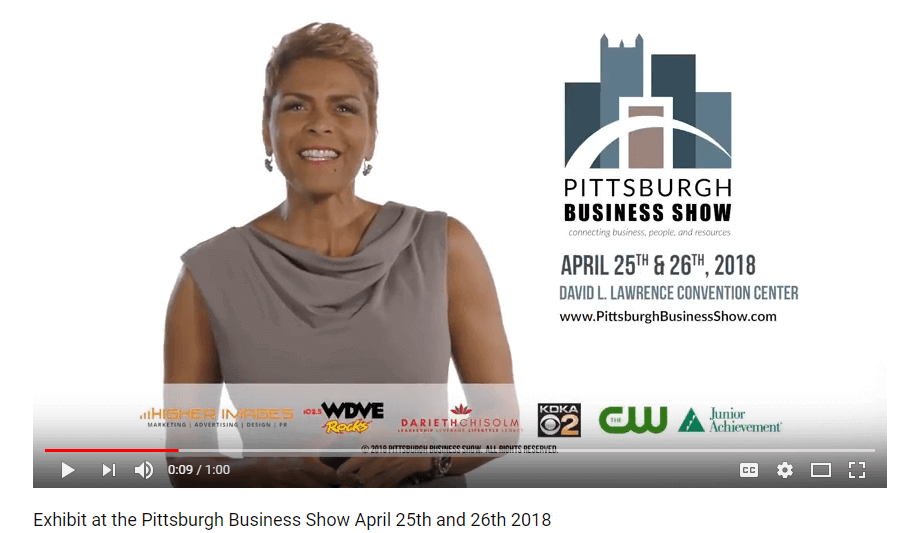 PITTSBURGH –  Starting this week, a series of TV and radio commercials will air to promote the Pittsburgh Business Show, a two-day business-for-business trade show and networking event taking place on April 25 and 26, 2018, at the David. L. Lawrence Convention Center.

The commercials will air on television stations KDKA-TV and The CW and radio station WDVE, which are media partners for the Show. The TV commercials feature video and pictures from last year’s show and are narrated by Darieth Chisolm, an Emmy-Award winning television personality, author, visibility coach, and multimedia strategist.

Each commercial is targeted to specific audiences, including companies who would benefit by exhibiting at the Show; people who would like to attend the Show and experience the events featured; and those who are interested in nominating their favorite area companies for the first-ever Business Choice Awards. The commercials range from 5 to 60 seconds and will enter a heavy ad rotation prior to the Pittsburgh Business Show. The TV commercials will be shown during morning and evening newscasts, sports shows, and other popular programs.

The commercials were produced by Cut ‘N’ Run Studios, a video and multimedia company based in Pittsburgh.

This year’s Pittsburgh Business Show is a two-day event that includes more than 300 exhibitors, 30 speakers and workshops speaking about 20-plus industries, and casual and formal networking events for business owners, executives, and employees. Discounted two-day tickets can be purchased at PittsburghBusinessShow.com. These commercial spots can also be viewed at the Pittsburgh Business Show’s YouTube Channel.

TESTIMONIALS
SUBSCRIBE TO OUR NEWSLETTER For Promotions, Show News, and More!